Math is a way of thinking (the correct way of  thinking).  The term mathematics covers a lot of ground.  It includes addition/subtraction, multiplication/division, exponents/roots/logarithms, algebra, geometry, calculus, topology, probability, combinatorics, logic, number theory, differential equations, matrices, game theory, set theory …  I’m sure there’s many maths that I have neglected to include. 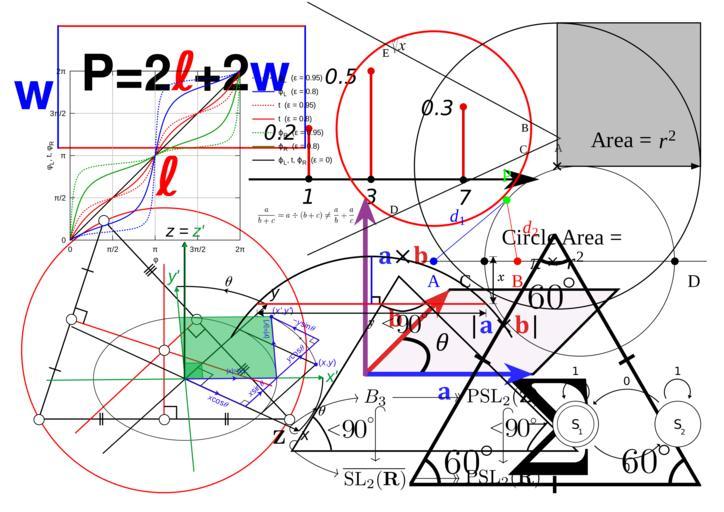 Why is Mathematics so special?

There's a lot of strange things that lead me to believe that Mathematics is the language of everything.  Take the most common shape of the Universe - the Circle.  I usually get some argument here - but think about it.  The stars appear as circles, drop something into a liquid and circles appear, cut a tree and get a couple of circles, and on and on.   Lots of circles.  The relationship of a circle to it's radius is Pi or π. The wondrous thing about pi is that it cannot be expressed as a fraction.   We've divided the circumference by the diameter of a circle, and carried the result out to over 5 trillion digits.  It never starts repeating, it never forms a pattern.  It's a number we are not able to actually write down.  So, we invented a symbol.  Because it can't be accurately expressed as a fraction, Pi is called "irrational".

But, that's not all.  Everything on Earth is being pulled towards Earth's center by gravity.  So, If you want to build something that gravity is less likely to pull down, you build it 90 degrees from level with the Earth.  The hypotenuse of a right angle triangle with two equal sides will be the length of one of those sides times the square route of 2.  The square root  of 2 is also an irrational number.  The Golden Ratio - an irrational number which pops up in many of the most beautiful examples of architecture - also irrational.   e (Euler's Number).  Keeps coming up in finance and number theory  and, although it's difficult to prove, e is probably also irrational ~ 2.718...  It's the base of what are referred to as natural logarithm.

Is it a coincidence that some of the most common relationships are multiples of numbers we cannot write down?

Why do I need it?

It’s true, some professions need it more than others.  But, if you intend to make money, then mathematics is something you need, if for no other reason than to keep track of your money.  Assume you want to purchase a house.  Neglecting the closing costs and numerous other considerations, let’s just say that you want to figure your monthly mortgage payments.  You would need to use the formula P = r(PV)/(1-(1+r))^-n where P stands for Payment, PV is the present value or size of the loan, r is the interest rate, and n is the number of payment periods.

So, even with something as simple as a mortgage, there's a definite need to understand algebra.  There's websites, calculators, and other people who will figure it for you.  But if you don't understand a little about what they are doing - you're going to be at a disadvantage.

And we're just talking about finances here.  You need it because you need to know what you're doing rather than just guess at it.  I use mathematics constantly, at work, at home, in the car heading to wherever.  My best formulas are solved on the wall of my shower.

But why does it have to be so hard?

Imagine yourself full of caffeine and ready to take on the world.  You're surrounded by 19 or so friends who are also ready to take the world.  Now, you're required to sit at a desk and be quiet while a fascinating speaker explains stuff to you (a lot of which you already know) for 45 minutes.  Then, do this over and over again 7 times a day, 5 days a week.  And that's the best scenario.  The fact is there's probably more than 19 other students and there's a likelihood that not all of them are friends.

Why doesn't the teacher make it more interesting?  Some of them do!  That's the amazing thing.  Under the above circumstances, it's a miracle if your student gets anything out of it.  A lot of the teacher's time is spent convincing students that it is in their best interest to pay attention.  Math is not all that hard.  But concentrating, in a traditional classroom can be very difficult.

The fact is, in order to get past some of the obstacles - I do encourage you to try doing some of your math at home.  You can grow to love this stuff - I promise.