Exponents are really fairly easy to work with.  If you are figuring the area of a square, you multiply a side by itself.  So, when you multiply anything by itself, we say we are squaring the number.  If you want to multiply something times itself three times, you take the number to its third power.  Because the volume of a cube is side * side * side (all sides are equal in a cube) You might say we are cubing the number.  For a definition, check out dictionary.com.

Oh, remember how we can assume everything is being divided by 1?  5 is the same as 5/1 which means we can express 5 as a fraction which is what makes it a rational number.  We're making another assumption.  If there is no exponent,  It's 1.  So the variable x is the same as x1.

So, when you multiply one term times another, assuming the base is the same, just add the exponents.

One more thing that is super

I like to focus on the Positives, but - what the heck.  I really enjoy negative exponents because they are really easy but they seem to freak out a lot of people.  So, follow with me and we can show off to our mathematically impaired friends.  Oh, by the way, the term "mathematically impaired" does not really exist.  When you say it, you should always use a kind of snarky tone.  You can be ignorant of mathematics, but it's not something that some have the power to learn and others don't.

Remember when we were talking about dividing with exponents, you subtract the exponents? 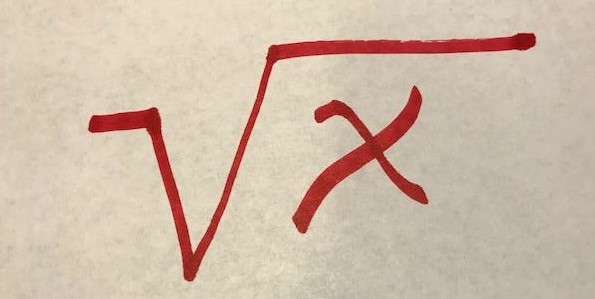 So, here we go.  I'm assuming your familiar with the square root symbol √ ?  It looks a bit better when you draw the thing - I don't know, does it look better when I draw it? (see above).

Now, the symbol, by itself, assumes a square root.  If we put a number in the crook (see below), we are taking different roots.  In the illustration we're doing cubed or third root.

The simple rule is that there will be one less change in direction than the highest exponent of the variable.

Ahh, it's a fine line that separates me droning on forever explaining a concept you understood three paragraphs earlier, and me bringing you to the edge of enlightenment and then stopping.  These confuse a lot of people.  If you find my explanation too long or too short  - that's what this form is for.  Help us out and tell me what is needed.

If you would like to participate in any constructive way, please do so - click on the button below, thanks Home, Algebra, Exponents