Here we are, you did a search for Function Mathematics or you have successfully moved ahead in the aMAZEing Math Maze.  We'll talk about functions later - let's get into the maze for now.

This question is vaguely about rabbits.  There's kind of a neat article that explains that one rabbit can turn into 184,597,433,860 rabbits in seven years.  But, I digress....

Bob, decided to breed rabbits for fun and profit.  By his calculations, his rabbit population would triple every month.  I know - a bit unrealistic to start with 1 rabbit (ask your parents - jk). 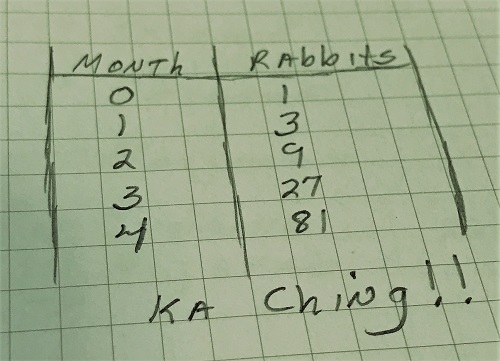 What type of function would represent this data?

O'k, here's the skinny on Function Mathematics.  A problem is a function when each value in the Domain links up with only one value in the range.  The Domain is the values you can put into the equation, and the Range is the output.  So, let's look at the equation y = mx +b.  m is the slope, and b is the y intercept (when x = 0 all we have left is y = b and that's where the line intercepts the y axis.

That made no sense at all!

Let's try this another way.  If you graph the equation, you can use the "vertical line test".  This says that for the equation to represent a function, no matter where you draw a vertical line, it will not cross the line formed by the equation more than once.