Time to come to terms with math terms the expressions used in mathematics.  Ah - more vocabulary.  I love math, I have met people who think they do not love math.  I haven't met very many people who love math vocabulary.  But - it's important - so, here goes.  In math, a lot of words tend to mean different things than they mean when used outside of math.

The Operators in Mathematics

There are a bunch of ways we go about telling you whether we're adding, subtracting, dividing, or multiplying in mathematics.  Please remember, I'm not making this stuff up, I would have done it differently if they'd have asked.  For some reason nobody checks with me before they come up with a lot of this stuff.  So bear with, and don't shoot the messenger.

+  that's the plus sign or addition sign.  You're adding one term to another and producing their sum.

-  the opposite of plus.  Here, we're subtracting one term from another and getting the remainder,      of difference.

x  the little x there was what we used for multiplication.  Now that x is going to sometimes be a               variable, we've come up with other ways to say we're multiplying.

I also have a free worksheet on this topic at Expressions Worksheet.

Math Terms refer to the individual elements of an equation, expression or even series.  They are separated by plus signs, minus signs, or commas.  Example

Let's look at 3x.  So, two things multiplied together, make one term.  The 3 in 3x is called a coefficient.  A coefficient is any number multiplied by a variable.  The x is the variable, a variable is a symbol used to represent a number that can vary.

Like terms contain the same variable.  You can combine  like variables, but you cannot add unlike variables.  x + x becomes 2x, but x + 2 does not combine.  Neither does x + x^2.  The variables look the same but are considered different as the second variable has been squared or raised to the second power.

An expression is a collection of one or more terms.  Expressions do not have (=) equal signs.  They also do not have inequality signs like (<) less than or (>) greater than.

Equations are Like expressions except we're doing a comparison of some type.  Meaning we do have an equal sign and/or a less than or greater than symbol. 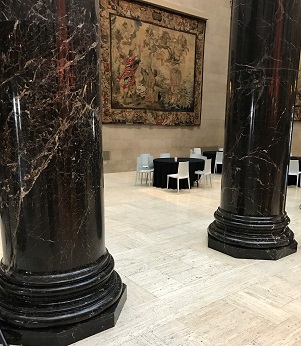 An Algebraic Expression is an expression that contains one or more variables, but does not contain an equal sign.

Again, it's the same as an Algebraic Expression - except, it equals something, or is greater or less than something.  Keep in mind it could equal a number (or constant) or it could equal another expression.

At this point, I'm hoping you understand the difference between Terms, Expressions, and Equations.  The above picture demonstrates very little.  I just really like the picture.  I could make something up like the Equality of the two pillars or some such rot - but, what the heck.  I took this picture at the Nelson-Atkins Museum of Art in Kansas City, Missouri.  One of my favorite places.