There are a lot of math tricks to choose from.  Most of them involve using one or more of the math rules I talk about on this site.  If you don't know the rule, the tricks are pretty hard to figure out.  These are all math related tricks, for other card tricks check out this site. 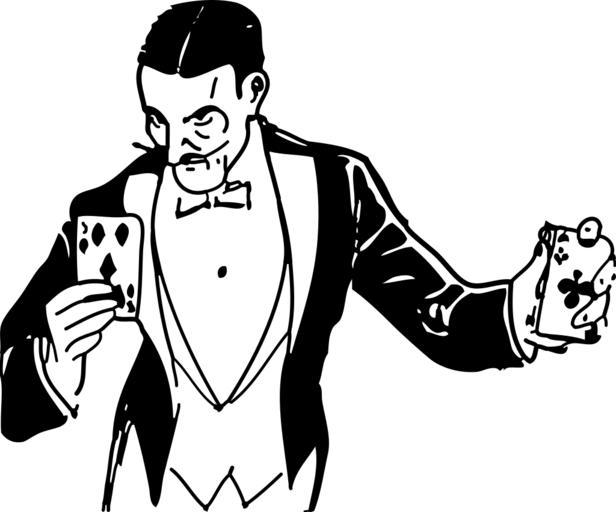 The magician then reveals that there are just as many cards face up in his deck as there are face up in the other deck.  This works every time.

This math trick begins with you writing down a number from 1 to 50 and put it in an envelope.  Then, have your audience think of a number from 51 to 100.

Mentally subtract your number from 99.  Tell your audience to add whatever number that is, to their number.

Cross out the first digit of that total, and add it to the result.

Now subtract the total from the original number.  The result is written on the paper in the envelope.

We write the number 45 on a piece of paper and put it in an envelope.

Drop the first digit which is a 1 and now his mental total is 6, add that 1 back and we get 7.

Now subtract this from the original number and the total becomes 62 - 7 = 45.

This math trick works great if there's somebody near by with a calculator.  But that's not really necessary.

Ask the audience member to pick any two one digit numbers, they don't have to be one digit - but tell the audience member he's going to have to do some adding and might want to make it easy on himself.  Now, without letting the magician watch, have them write the two numbers down starting with the lower number and then the higher number.  Add the two numbers together to get the third number in the list, write it below the second number.  Keep adding the two previous numbers to get a new number until there are ten numbers in the list.

Say - show me the list and start adding all the numbers up.  You look at the list (specifically you look at the 4th number from the bottom - take that number, multiply it by 11) - say the result and that will be the total of all 10 numbers.