XVI.  Slope or Rise over Run

Slope, pitch, ratio, rate, gradient, obliqueness, rise over run, steepness, sway, or whatever you want to call it, it's all the same thing.  In math we write equations in a particular form.  A linear equation is one that does not have an exponent on the variables.  The Slope-Intercept form of a linear equation is y = mx + b, or - if you prefer - f(x) = mx + b.

Lot's of professions use slope everyday.  There's a slope calculator available at www.blocklayer.com. 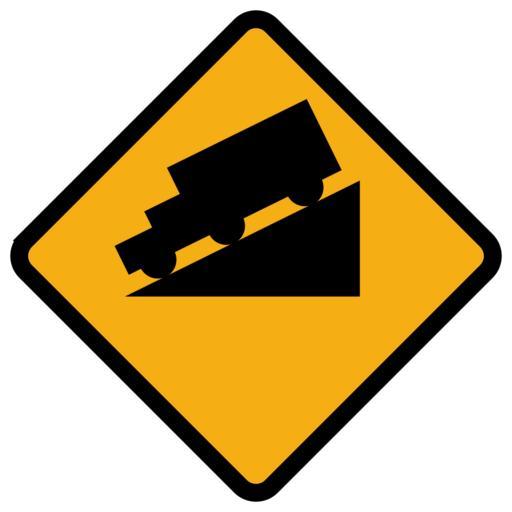 Given two points - How do you use Rise over Run to determine slope?

Excellent question!  let's take two points, say (1, 4) and (3, 5).  Were you to plot these two points you would count over to the right on the horizontal x axis one space.  And up 4 spaces on the vertical y axis.

You would do this because, on a Cartesian coordinate system  (a fancy name for the x/y graph we're all pretty much used to - in the 1600's a french mathematician named Descartes liked to use Latin to name things, the actual word was Cartesius but - I digress).

So, the first point would be at (x, y) or (1, 4) or one to the right and 4 up.  The second point would be plotted 3 to the right and 5 up.  If the coordinates were negative we'd go to the left and then down.  Draw a straight line through those two points, extend it to infinity in both directions, and that's all the possible values of x and y.

But, being the kind of guy who doesn't trust drawings, we can also find out a lot about the equation of the line by looking at those two points.  In 2 dimensional space, we only need two points to define a line.  So, we use the rise divided by the run to determine the slope.  The common phrase for this is rise over run.  The rise is formed by the second coordinate or y coordinate, since this is the axis we rise and fall on.  It's vertical and goes up and down.  The run is the first coordinate or x coordinate.  We are interested in change.  So, subtract the y's and divide that by the result of subtracting the x's.

Super important formula.  In this equation the y is a dependent variable (it's value depends on what value we assign to x).  The m is the slope, we're multiplying it times x and that makes the line tilt.  The x is the independent variable (we can make it whatever we want).  And the b is the y intercept.  Note that when x = 0 we get y = 0x + b or y = b.  So, when x = 0 the line will intersect the y axis at b.